I Built my Mom a Shed – Plans from the Icreatbles.com "Modern Shed" 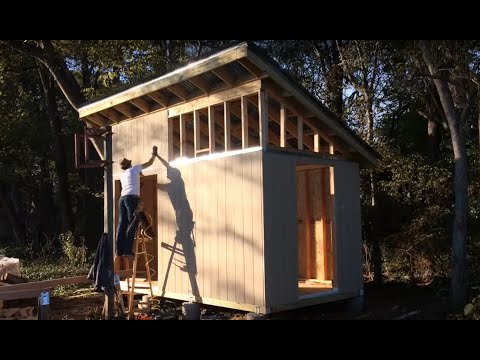 This shed was built following the Icreatables.com “Modern Shed” plans with some modifications. The front wall is taller than the design, and the clear polycarbonate roof was added. We had very little waste from this build because of the 8×16′ size. Only end pieces, and smallish scraps were left.

The concrete pier foundation was included in the plans, but I sistered two 2x6x16s instead of using LVL beams, LVLs were not readily available. I dug the holes 16″ down and added 4″ of gravel. 8 Piers with a 12″ diameter took 24 bags of concrete. You can do it without a mixer in one hard day. Piers were 24″ and 12″ above ground. This provided some nice storage for extra wood, bricks, and things that don’t need to be indoors.

All building products were purchased from Home Depot. The bulk delivery arrived in less than 24 hours from being placed and all items that I had to return were accepted without conflict. If you copy this build avoid Palruf PVC clear roof panels and purchase Suntuf polycarbonate instead. it is the same manufacturer, but Palfuf is not meant for enclosed applications. That said, the Suntuf Ploycarbonate was not an easy installation either, and I have some leaks – maybe 3% of the holes. Plan on sealing the predrilled holes with approved silicone and washer-screws before the final tightening. We love the clear roof – it won’t be a creepy dark shed.

Also thanks to Shannon + Crew at Houseimprovements.com. He was my guru of choice throughout the build. Thanks Shannon!

How much money for materials?

Nice job! I like the clear roof tiles to let in natural light

Good work, but the thing i hate about a raise floor is all the critters will try an make it there home.

Nice! I sent this to my wife for ideas on a future pottery shed she would like!

Forgive me for saying this but good job btw but i think i would have built windows running along the top half something looks out of place, to tall in the front maybe there was a budget to think about putting windows in along the top would have brought more reasoning to making it so tall or he wanted the steep pitch for snow purposes. idk just my opinion.. great job what you have done.

Mom getten after it at the 1 min. 40 sec Mark made smile. Very cool

that would make a cute tiny home

I wish i could work that fast 🤣

You're a fine son and an honest man–you acknowledged the help of the "guru".

Your mother must be so proud of you and her shed.

Nice job! Thank you for sharing.

What's the name of this song?