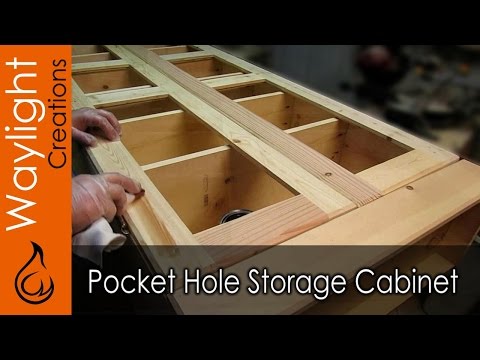 Any easy to make storage cabinet using pocket hole joinery. A simple weekend project.
MORE details or PLANS for this project – http://waylightcreations.com/simple-diy-storage-cabinet
Check out our site for FREE plans and more http://www.waylightcreations.com

The whole build started out with a few pieces of standard 1x pine boards.

First I marked out and cut the pieces I would need for each shelf.

For this cabinet there are 8. Seven actual shelves and the top.

After I had the proper length cut for each one, I headed over to the table saw and ripped each piece down ¼ inch shorter than each of the sides would be to allow for the back panel later on.

Using a circular saw, I cut some off the side of each board that would be the side to bring it down to the dimension I wanted. I also cut them to length on the miter saw.

Once I had everything cut for the shell of the cabinet, I started the task of drilling all of the pocket holes. I laid these out with equal spacing so they would look somewhat nice when the cabinet was opened, especially since I wasn’t planing on filling in the holes.

After all the holes were drilled I did the most exciting part of the project. I only sanded the side opposite of the pocket holes though. It saved both time and my sanity. I also hit the front edges as well.

The next step was to mark out where each shelf would go. This is fairly quick work of you measure out each shelf and then pencil your lines on with a square.

Now that all the holes are drilled and the marks are drawn you can start screwing the shelves to the sides. I started out by attaching all the shelves to one side. After I had all of those attached, I moved what I had assembled, flipped it and sat it back down on the opposite side. Since both sides are marked the same, this makes it incredibly easy to line up.

Next, I flipped the cabinet on its face and added a ¼ inch deep rabbet around the inside edge of each side to allow it to receive the back panels.

The back panels I used were some ¼ inch thick harboard panels that I had gotten from an old building I recently helped renovate. Before nailing them down, I measured to make sure everything was square and then fastened them down with some brads.

Since these did come from an old building, I sanded down the back of the panels to remove some of the coal dust that was caked into the fibers.

I also made two pieces for the front of the cabinet that would set above and below the doors. To make them look a little nicer, I put chamfer on the edges. Then I glued and nailed them in place.

The last thing to construct was the cabinet doors. The doors I settled on were simple and were assembled with butt joints, glue and you guessed it, more pocket screws.

So they would match the top and bottom plates of the cabinet, I added the same chamfer around the outside edges of the doors, but I left the inside edges how they were.

… read more about this project on our website. Link at the top of the description.

So professional instead of EASY DIY….

some door knobs would be nice too! I'm usually anti pocket holes but you can't deny the ease of use when building. good job

I've made many cabinets with this method. Just add glue and this will hold a lot of weight. Since you said this was for the shop, I would not have wasted time on recessing the back but would have used glue and staples and just overlapped the back and shelved. It would have been very strong. I know because I have several made just this way. In the basement or garage you don't have to be so finished. Just when you make them for storage in the house where every day people will see them.

Well done dude. So satisfying when you create something that was just an idea in your head. I would have painted it because of the difference in grain colour. Otherwise…..excellent 😉 I use pocket screws all the time at home on projects and for work. So quick and easy.

Loved your video. You have wonderful tools that I wish we had. Please keep making videos of anything that you make. 👌

I heard you mentioned that you used pocket holes because you weren't going to store any substantial weight. Do you recommend using pocket holes for a cabinet built for stereo equipment? I have an external amplifier and stereo receiver, which are the heaviest pieces of equipment I'll be using. I like to the pine wood by the way, but do you suggest the pocket hole method in my case?

what tools do you use please

Nice! This is exactly the cabinet style i'm looking to make. Thanks! For my door panels i'm going to use frosted glass with a light green tint.

hey man, could you send me the list of materials and measurements?

looks great! i would have used glue and then screwed everything together makes it little more stronger. also glass panels would look great instead of boards! either way great work.

Dude, this is great! How did you build your Harbor Freight Table Saw bench? Looks awesome and functional!

Nice, thanks for sharing.

where did you get the pocket hole jig from?

Was not bad at all

I don't have a lot of tools, so this will work for my project. Need to figure out how to beef up the shelf to hold weight. Should be easy with a horizontal board.

I need ideas, on how to build a pen kit storage cabinet fo kits and supplies

Absolute awesome sauce! Really inspiring…..going to change dimensions/ design a bit, plank it all (barn style), and instead of shelves..install (perhaps plumbing fixtures) clothes rods. Am going to attempt glue and nails (I like the oldie look of nail heads), but I must say pocket screws rock and will find something to implement them in a future project! Great job, thank you for keepin it simple and sharing!