Guy Makes A Great DIY Project With A Junkyard Find 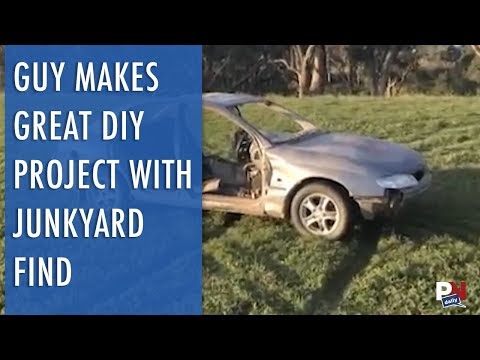 The junkyard can be full of hidden treasures if you take the time to look. And YouTuber William Foster found himself an awesome DIY project. He picked up an old beater car and turned it into a full-sized RC car.
Popular Mechanics, he used a standard RC transmitter and receiver to control the car with a remote that’s connected to computers he mounted in the center console. He rigged up a way to depress the pedals and power the car with stepper motors. To steer, he used a chain and sprocket system that lets him control the car. It’s a pretty ingenious system, for the whole video check it out on PowerNationTV.com

This week on PowerNation Katie introduces you to the hosts of our new off road show called XOR – Jeremy Weckman and Eliza Leon. They’ll talk about their background and their plans for our new non-pavement show!

Plus Katie features the 1963 Chevy C10 named “Reborn” by owner/builder Mike Amborn. Mike saved it from the scrapyard for just $500 bucks, hence the name, and restored it into a gem! He replaced most of the sheet metal and dropped in an LS1 with a 4LE–60 trans making about 400 horsepower. He lifted the bed up 16 inches so the wood floor appears to be a Tonneau cover. Inside Mike wanted a modern touch but a classic look so it looks stock, but has all the creature comforts. But one of the most striking features of the truck is the retro GM color called “Tartan Turquoise” topped with a “Gloss White”. Check it all out this week on PowerNation!