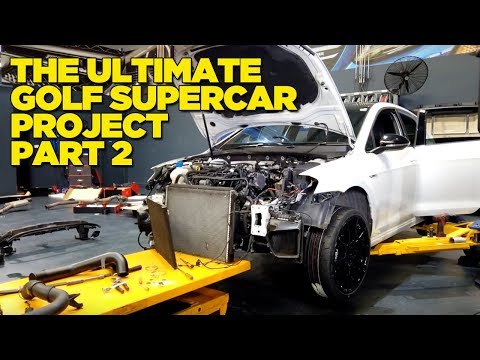 With just 24 hours to transform this Golf into a Supercar slaying Sleeper, time is running out fast to get it done before the sun goes down.

Thank you to REVO for supplying parts for this build https://www.onlyrevo.com

And big thanks to the team at Hills EuroHaus for letting us use their space, expertise and tools! https://www.hillseurohaus.com.au

Also something to note around Mighty Car Mods: we are normal guys and are not trained mechanics. We like to make interesting car mods and show you how we’ve gone about it, but we can’t promise that anything we show you will work for your particular car, or that you won’t harm yourself, someone else, your car or your warranty doing it. Please be safe, be responsible and unless you know what you’re doing, do not fool around with very serious machinery just because you’ve seen us make it look so easy. Talk to a qualified mechanic if you are in any doubt.

Wanna support the show? We have heavily discounted MCM Merch Multipacks and we ship worldwide! https://mightycarmods.com/collections/multipacks

I'm a fan of the VW Golf R and GTI, but I had a bad experience with my GTI.

Bought my GTI brand new, waited many miles, and tuned it Stage 1. It was a good tune, and made a significant difference.

On the 2013 mk6 though, the computer must be opened and tuned, the later mk7 allows for OBD port tuning; therefore, my point is, OBD port tuning is better than mechanically opening up the computer box because then, no matter how good you attempt to seal it back, moisture WILL be an issue later down the road, especially if you live down south with much humidity. The computer is outside of the car under the wiper covers.

Wow, what a difference, no one practically could keep up. Then at about 25,000 miles, my car developed a misfire.

Yes, all the codes were misfire, and all the usual 'stuff' was checked. Nothing worked, and I mean nothing.

So please, save your recommendations.

So, luckily enough, the dealership gave me a new engine, at no cost to me.

Then I went full Stage 3, meaning ECU tune, cat backs, downpipe, intercooler and cold air intake, also lowered my GTI by about 1/2" all around and waited about 5,000 miles on the new engine before playing around with it.

Now for me, my cars are always paid for, so it's not a really big deal.

Well, the misfires started again, and I would certainly recommend the valve spring and keepers system if you are to tune your vehicle. Some of the mfg springs just won't work. This was a secondary issue and was sporadic in nature at higher RPMs only.

Is it worth it? My answer, no. If you use your car daily or somewhat say about 1,000 miles or less per month, then go ahead, but if you drive much, at least on the mk6, you will eventually have issues.

I think tuning is great, and the VW's give the most bang for the buck to Hp increases, but long term, MY experiences have not been worth it.

Don't get dragged into the marketing hype. Personally, I did NOT find the tuner very supportive in my situation and I certainly did not find the authorized tuner who did the actual work very supportive either.

One just puts you between the other, and they both blame you eventually.

Ironically, I see many tuners offering some type of "warranties" now on their tunes today, but basically that's limited also. My tune was made in 2014.

I say, buyer beware and make sure you know the consequences of at least a Stage 3 tune. If you build it up from the internals, that's one solid method, but the electronics and coding of the tune are a whole separate issue, and even though tuners claim "engineered tunes"; and being a degreed mechanical engineer myself, buyer beware.

My tune met every specification the tuner recommend on my car, and again ironically, after my tune I did some research and found many, many people with the same tune I had with the same problems and they all went unresolved. In parallel the tuner came out with other devices to add to your tune to better optimize what was suppose to an already optimized tune all under the "guise" of marketing hype of their being no problems whatsoever.

Tuners spend much money on R&D, but they spend much, much money hiding issues also or at a minimum, misconstruing the real issue versus what the solution may be.

The point is, you should not have any issues if you tune to their specs, after all its "engineered" and they spent all the time, money and effort going through the R&D, right?

Moral of the story, buyer beware, and don't just think you can add parts and in parallel you will be perfectly set into the future. It does not happen that way, at all. No matter what the tune!!

The only thing missing really is some high quality coilovers, something track oriented. Drop some ohlins in this golf and you are allowed to put a sticker 'catch me if you can' style 😅

Too bad that it's RHD.

Michael Bolt-on. Cannot wait to see this car on a track.

Awesome build! But like the OEM pretoria wheels better :/

Awesome vid, as always, but my dear Mog….. Stop eating stuff that's in those cars for years….. Eventually you will get some mushrooms around your lips 🙄

Mighty Car Mods, always fun to watch :). What is the title of the song/music which starts at 5:00?

Cool video, but man that intro…

I think a lot of guys trying to mod there cars just fantasied having money to buy 20k of aftermarket parts bolt it on and go but in the real world they don’t there going to auto zone or Canadian tire buying spinner hub caps and stickers 24case of beer left over money from there welfare checks.i saved for years to buy my car now I want to modify my car but don’t know were to start so I’m asking you guys to help me out .my budget is $5000 i have a lift and a good mechanic. Im lost on what parts to buy and how to put them in . I would love to do it my self but I’m disabled .i need help .✌️

Me: Thinks Moog sounds poorly, or has a cold
Moog: Eats furry pringles and mints from under the seats

OMGMGGHGHG Im wearing the same Foo Fighters tour t-shirt! Except mine was re-printed for the last half of their UK tour and they added a leg cast to the print haha (was when he fell off the stage and broke it)