How To Repair/Replace Leaking P-Trap Pipe Under Bathroom Sink 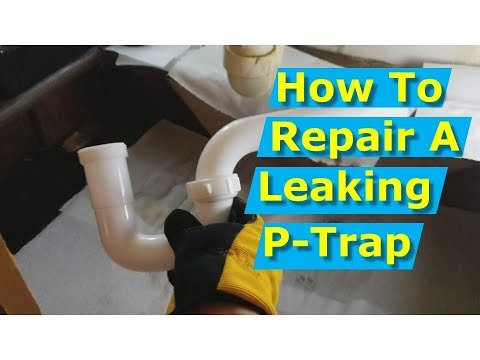 For all you DIY folks who suffer from a leaky p trap under sink, in this video we will show you how to repair it. Plumbing Tools and Plumbing parts in this video:

Replace your leaking P-trap pipes under the bathroom sink

You may have noticed water collecting on the floor of your vanity underneath your bathroom sink, and you’re wondering, do I have a leaking sink or a leaking p-trap joint? Where going to show you how to stop p trap leaks dead in their tracks.

The first step of your leaking p-trap repair

We need to root cause the source of the p-trap leaking water everywhere, like maybe it’s a leaking p-trap joint. So your leaking p-trap repair starts with feeling around or seeing where the water is dripping. It usually drips from a crack in one of the large plastic nuts that secures to sections of the P-trap together, assuming it is already tightened down and still you have a leaking p trap under bathroom sink.

How to repair p trap:

Sometimes a leaking p trap connection can be solved by simply tightening that white nut down a bit more, but if the plastic p-trap nut is tightened down all the way and you still have a leaking p-trap, then it is time for a leaking p trap repair, which is where this video comes in. If have a p trap leaking at nut, time to buy a new p-trap kit and install a new p-trap.

We’ll show you how to cut the old PVC drain connection off the 1 1/2″ PVC waste drain pipe coming in off the street, using PVC pipe cutting saws, in this DIY project to sop your p-trap leaking under the bathroom sink.

Now the vanity sink drain tail pipe needs a 6″ extension tube, shown in the list of parts above. This tube connects the bottom of the sink drain which is higher off the floor of the vanity to the p-trap, which is lower to the floor.

Now that we have showed you how to repair p trap, and how to install a p-trap underneath the bathroom sink, you are ready to get tout there and solve this problem on your own, DIY style. Don’t forget to show others how to install p trap under sink. Hopefully after you watch this DIT plumbing repair video, your p trap leaks no more!

Ask any questions you have in the comments below, we'll answer them for you.

what would be a fair cost for a plumber to do this job.

Nice job Jeff. The only thing that I would add to this is that the most critical connection and the one that should be snugged up first is the one at the rear of the p-trap. It's the only one that is not a slip fitting, but is the one that will be subject to almost constant water immersion. So it's critical that this connection be absolutely water tight. Snug it up, then tighten up the slip joints and then go back and tighten up the p-trap again. Also important not to go ballistic on tightening these plastic parts up; after all, they're only plastic. Old fittings of brass and copper could be wrenched quite a bit, but not so much with these plastic ones. It won't be of any consequence here but if this would have to be inspected by city, I would have made the primer a bit more noticeable. A little less pretty, but at least the inspector could see that you used enough and maybe not have to make up the joint again. Like your videos and presentation and you got a new sub.