How To Build A Shed: Building & Installing Roof Rafters 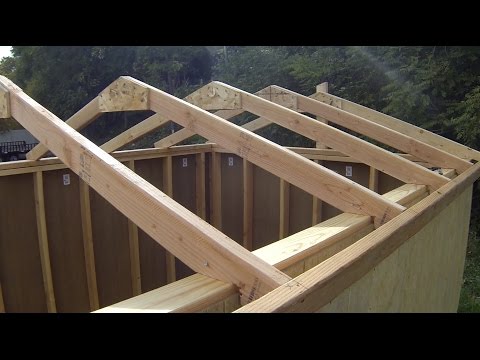 Sorry now that we’ve built all the walls are not gonna take a step back for a
0:07build the walls I actually used the floor debt to lay out the roof instead
0:11of using regular rafters and regular Ridge we built roof trusses I used the
0:17floor deck to snap out the lines because it’s much easier method of snapping it
0:21out full-length pictures and then building the trusses rate in place there
0:25on the floor deck so front-to-back is a feat that’s what this represents one
0:33side to the other one Walter the other we have big feet from the outside edge
0:37of that wall framing to the outside edge of this we have a look at the top of the
0:42wall on top of that we put a roof truss we’re going to overhang the soffits six
0:50inches just we made it 12 inches like the house it wouldn’t be in proportion
0:54with the shed so we want to keep the same details but shrink them down the
0:58right proportions so we’re making the overhang six inches so six inches from
1:02the outside of the wall to the front of the overhang so this wall actually this
1:08one right here what we want to do with mark the center it’s an eight-foot wall
1:13plus six inches on both sides give you 90 overall half of that which is the
1:19center of the roof four and a half feet know what I’m gonna do with just make
1:25another mark up here for five feet away doesn’t really matter the same distance
1:30for the six inches and then just draw the line and this is the center of the
1:39building and the center of the room but the slope of the roof some people call
1:44it the pitch we’re gonna using a pitch here and what that means in a pitch or
1:48in a slope means that for every foot I come in I’m gonna go eight inches up we
1:54know we’re going four and a half feet in to the center and go up eight inches
1:59there’s one foot 16 there’s two foot 24 there’s three foot 32 there’s four feet
2:06and then the half foot equals four inches which is right there
2:12ok now we have our top measurement here this is the top of the roof and we want
2:17the other top of the roof to fall right on top of the cord there just like that
2:24all these marks were making his to the outside of the roof so now you can see
2:37the three pieces that we need to build the trust we have the bottom chord and
2:41then we had to top cords one on this side an identical one on that side that
2:45we have to cut out a two-by-four stock what I need to do is get these two
2:50angles this one down here just one at the top so that we can cut this
2:55top court out a couple of different ways to do that as we know this is Nate pitch
3:0118 slow and on all of these speeds squares see a bunch of numbers here you
3:07get there all played out the same I use this one because it’s a little easier to
3:11read so it’s the same thing we’re looking along this Great year the top
3:16and we’re going to dial it up to hit the eighth the inside a lot i mean the
3:21outside at night the inside here that’s for the valley were going with the
3:25outside numbers that would be another way using a sliding T bevel that way you
3:33don’t even have to look at any numbers all you do is hold it up against the
3:38lines of it until you get the correct angle taken it up and there’s the angle
3:43for the top a long point to Long Point the outside edge of the rafter or the
3:51top court of the trust
4:05much better we’re going to use a plywood cut it to nail the trust together so I’m
4:11just going over at least a couple inches past the inside of the wall match the
4:15bottom edge year marked the top button minimarket down about a quarter I don’t
4:20want it
4:20coming up above the top 10 the same thing here down about a quarter of an
4:26inch doesn’t have to be perfect because it’s just a connection system what’s all
4:43that about eight inches 8 to 10 inches on either side
4:57together the two end ones on we have a trust between a gable and trust in a
5:10regular trusses that the gable and trusses sit on the gable end wall on
5:15each end because I sit on the end wall sheathing goes up we have this big gap
5:21with nothing to nail too so we’re gonna put in little operates in here so this
5:25evening can be mailed to it all the trusses inside don’t need that once the
5:30shooting comes up half inch or less be in this case and we near the whole thing
5:34together that’s what really tight it together makes us strong
5:40on this said we’re using two methods to build the gable in walls for no other
5:44reason than to show you two methods are most likely to use when you build your
5:48shed you want to pick one method and use it on both cable ends if you use a trust

In my opinion, that is not the right way ( at least not the most common) to work on rafters, and please, better use the square

just go to woodprix if you'd like to make it yourself.

I like your video very much. I build a small house, 6/4m and I,m building the roof now. I bought some beams for the attic, they are 8/8cm, (the base of the rafters, the rest of the rafters are also 8/8cm.), they are put horizontally on the walls (concrete blocks), the base of the attic. I,m a little worried that they are not thick enough, I mean those that are put horizontally. Coud you tell me if they are thick enough? Thank you so much.

I’ve built quite a few add on garages and storage buildings but I never thought of making myself a template on the floor of the building for the roof truss. That way they should all be exactly the same I think he did a great job and I think those of you that are thinking you should just build the wall and put on the wall 90% of that stuff doesn’t come out square no matter what you do unless you have something to back that up like a template

I am so sure that you will find good way to make it on woodprix.

I made it by myself. I used woodprix woodworking plans for that.

Wow. A lot of time wasting on calculating.

if you want to know how to make it yourself , just go to stodoys website. There you'll find your answers 🙂

Thank you Ryan, I am happy to purchase your shed plan [Check Details Here⇒>https://paper.dropbox.com/doc/My-Shed-Plan-OcMcPKuDVYpKlAmwuZcDy ]. It has saved from being frustrated, something I always encounter with other plans in the past. I just love the easy step-by-step method you use.